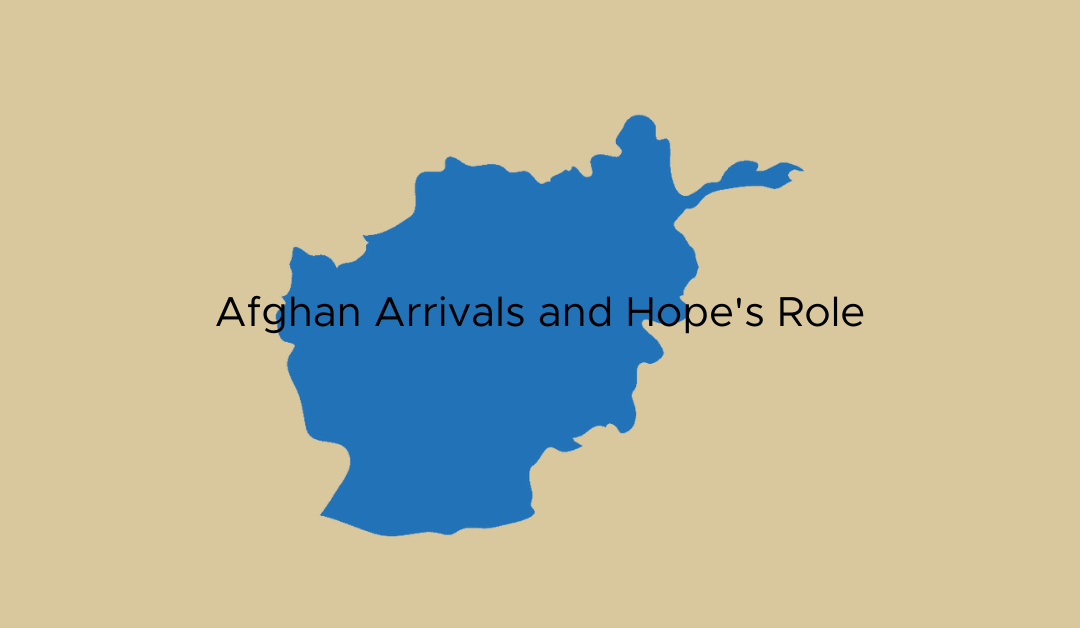 The diversity of our clients is as varied as their needs. With each one, we ask “how can we help?” and listen so that we can respond appropriately and in the way that will be of most assistance. Whether it’s helping find the right English class that a person can attend if they have transportation challenges, to holding mock-interviews to get them ready to join the workforce, the way we respond is just as important as the help itself.

Right now, we are facing an unprecedented and unforeseen crisis: how to help Afghans who are arriving in Denver. As the last planes left Kabul airport in August, our part-time Afghan Navigator, Lailey Hashem, was already preparing – although she could have never known the reality of what was to come. With members of her local mosque, they collected thousands and thousands of items: kitchenware, clothing, books, shoes, towels – anything that could potentially be useful. The community came out in a big way, overwhelming the mosque’s limited capacity to store things. They have since rented 5 storage units, in addition to filling 2 large gathering spaces at the mosque.

After quarantining at various military bases around the world, Afghans began arriving in Denver, and the reality of their struggles were quickly becoming apparent.  Families arrived with nothing but the clothes they were wearing when they left Afghanistan, as each family was allowed to pack only a single backpack.  The challenge is not just to get families and individuals housed, clothed and fed, but respond to their incredible trauma. One family recounted their journey: they left Kabul in a packed military plane and then made it to Qatar, where they had 15 minutes to eat a military MRE. From there, they took a flight to Germany. It took another 3 days before they were given anything else to eat. After leaving Germany, they finally landed in the US and were transported to a military base in Virginia. 44 days later, they arrived in Aurora. Through community connections and word of mouth, they were able to get in touch with Lailey, who arranged for a ride from Aurora to the mosque in Northglenn to get household items. While at the mosque, the father began talking about his PTSD, and that he was able to get homeopathic medicine that helped with his stress “only a little bit.”

The mosque also saw a 9 year old boy who had to leave his parents behind in Afghanistan because they were unable to secure passage for themselves. Another lady went in and told the people at the mosque that she couldn’t even wash her dress because she literally had nothing else to wear.

It’s important to respond to immediate needs, but we also want to focus on the long-term success and happiness of our new neighbors. Lailey spends hours talking with people like the ones above who are overcome with sadness and stress, helping them work through their feelings and emotions. She will then work with these same individuals and families to get them set on a pathway for success: opening a bank account & teaching them about American finances, making connections with other agencies who provide English classes, locating a doctor that will work with refugee families without health insurance, or enrolling children in school – just a few of the many, many needs that Navigators respond to on a daily basis.

Investment in people is often overlooked since the immediate needs are so evident, but these families and individuals truly cannot hope to integrate fully into their new home without the assistance of somebody who knows their struggles and can hold their hand along the way – oftentimes that takes years. Our goal is to not only hire Lailey full-time, but add another Afghan Navigator to our team to meet the needs of the nearly 2,000 people we anticipate coming to Denver. Please consider investing in our communities by donating to Hope’s Navigation efforts. You can be sure that every single dollar  goes toward helping somebody who desperately needs it.

Kyle Clark is graciously using his platform to help raise funds for this program. If you would like to donate, please use this link to help with his efforts!